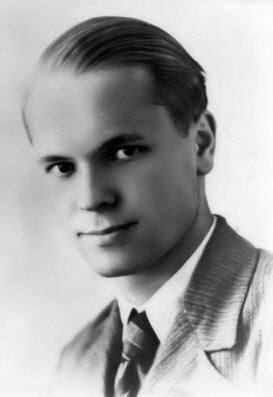 In a time of history mastering, where opponents of the Hitler regime who fell out of favour have been rehabilitated again, was Maurice Bavaud ignored for a long time.

Maurice Bavaud was a theology student who tried to shoot Hitler in 1938. For this offence he was beheaded with the Guillotine in Berlin-Plötzensee in 1941.

It began on the 9th November 1938 in Munich, few hours before the great Jew pogrom which was called "Reichskristallnacht" by the Nazis. Hitler marched at the top of his regime in the direction of "Feldherrnhalle". Among the audience was also the 22 years old theology student Maurice Bavaus from Neuenburg/Switzerland. Equiped with a pistol, which he hid in his coat pocket, he waited on the VIP lounge near the "Heiliggeistkirche". When Hitler marched past him he tried to draw his pistol but was hampered by bystanders, who reached out their arms for the "Hitlergruss".
The action would have been condemned to fail anyway because the distance from Hitler was to big in order to fire a deadly shot. After this failed plan Bavaud observed the steps of Adolf Hitler in the next few days. But he wasn't able to get through to him close enough.
Finally Bavaud got on a train to Paris but was arrested during the trip because he didn't possess a ticket. The police found together with a pistol a strange letter of recommendation and therefore they handed over Bavaud to the Gestapo. The Gestapo assumed that Bavaud wasn't a single offender but guessed that there had to be a circle of conspirators.
At this time Hitler was looking for a pretext in order to take tougher action against the Catholic church. This was probably the reason that the hearings lastet more than 30 months.
Under torture Bavaud made contradictory statements, among others he gave to understand that Marcel Gerbohay - a study colleague of St. Ilan - had been the client. However at court he gave evidence that it was his only decision to perpetrate an assassination against Hitler.

Bavaud's family described Maurice - who was a admirer of Gandhi - as a calm, level-headed pacifist, searching, well-readed and iintelligent. A dreamer und loner who informed himself during his search of orientation in the right as well as in the left political spectrum.

When they asked Maurice Bavaud for his motive, he answered that he takes the personality of the German Führer as a threat for the mankind and the independence of Switzerland. A further central motive was the suppression of the Catholic organisation in Germany.

From the files follow that the Swiss envoy in Berlin at that time, Hans Frölicher, didn't have any interests to plead for the release of Bavaud. He condemned Bavaud's trial as detesting. Also the Berner government decided to sacrifice Bavaud to the reason of state.

In 1955, fourteen years after Bavaud's execution, he was once more sentenced to 10 years in prison during an appeal process which was demanded from Switzerland in post-war Germany. Obviously the life of Adolf Hitler appeared still to be protectable and Bavaud's act was to look at as criminal. This judgment was picked up in 1956 during a second appeal and Maurice Bavaud's family got a compensation of 40'000 marks.
In 1998 the case Maurice Bavaud became again to a Swiss political issue. It was a question of whitewashing the name of Bavaud at least and to rehabilitate him officially. Finally the Bundesrat made up his mind for the following statement:
"Switzerland, included by name the legation in Berlin, didn't exert itself sufficiently during World War II for the Hitler assassin Maurice Bavaud und protected their responsability insufficient. "

A half-hearted excuse which hardly describes the fact, that the government had abandoned Maurice Bavaud completely.

On the bottom is shown an interesting letter, written by Maurice Bavaud during his imprisonment in Plötzensee one year before his execution, which grants an interesting insight into the psyche of Bavaud. 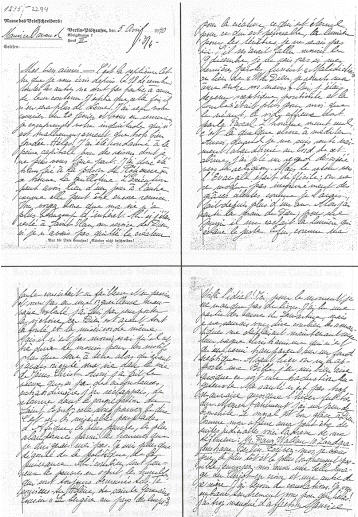 This is the seventh letter which I write to you since the 18th December. All other letters weren't send off because of their contents. I hope, it doesn't happen the same with this letter. I have received your letter from the 20th February and I say thank you. I can understand your concern, which unfortunately are very well-founded. Unfortunately! I was sentenced to death penalty for reasons I don't want to tell you. That's why I was brought to prison to Plötzensee where hte Guillotin is located. The execution can be held every day - in the same way it could be remitted. You can see that my life doesn't have a value any more.
Ah! When I had kept my service for God in St. Ilan! Hadn't I left the Creator for the Creation. That who is for ever for those which are fugitive. That who is the light for the darkness. Then I wouldn't be here. When I have to die on the 19th December, I don't know, whether my last words will be "damned" instead of "my God, I put my soul into your hands".
Yes, I have become sceptical. And the grave is for me, who negates it, not more than the terrible emptiness of which Pascal speaks. The man dies alone, this is something, which you should think about. Although I feel myself really deserted at the edge of this abyss I cast a hopeful look at the religion. But the return to the gospel would be difficult. You cannot make yourself fun of the heavenly mercy in the way I have done for more than one year. Therefore I have felt the hand of God. In order to punish me he has taken up the light which enlightens the justice. Finally, since my mistake was made from weakness and passion and not from bad, arrogant intention, God gave the victory back and also the goodness and mercy.
Isn't it really very hard to die because of earthly reasons after I have led a life in the sense of Jesus Christ first.
I also have the wish, if I get away fro here by uncommon circumstances, to return to the religious order "St. Esput". This you can tell. I will lead my steps to the most miserables in Africa, to the poorest and most abandoned among human beings. I am disgusted of politic and power. Ah! How are the poor happy in the humility and modesty which surround them.
Do you remember, Hélène, to "Die Schäferin im Land der Wölfe"? Here - the ideal. Here I am not lacking in books at the moment. I have read a part of the work of Lamartine. But her romanticism I don't like. Her vague Christicism is nothing than a transparent bubble on a doubting ground. The day before yesterday they brought me the Bible and I found out pleased that it concerns a Hougenotte interpretation.
My state of health is not too bad although the winter was very hard. At the moment I suffer a bit from bronchitis. The frame of mind is well, thank God.
Because my affair could maybe have lawful aftereffects, here the address of my defender: Mr. Franz Wallau, Landgrafenstrasse 10, Berlin.
Write me, I ask you, as soon and as much as possible. And also send me a beautiful picture of Christ and one of his mother. I need comfort. I embrace you tenderly. I am missing your affections so much.
Maurice. 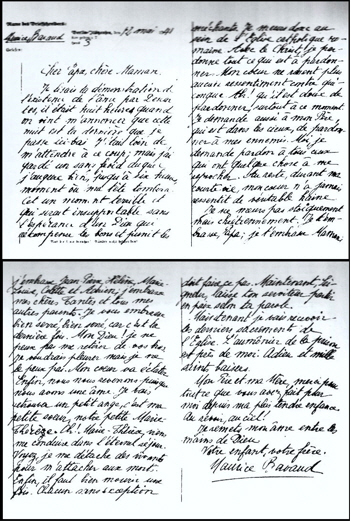 I was reading Descartes' proof of the existence of the soul, it was eight o'clock when I was announced that this night would be the last I would spend down here. I was far from being prepared for this blow, but I have preserved a cold-bloodedness which gives me hope until six o'clock, until the moment when my head will fall. That is a terrible moment, which would be unbearable without the hope of a God who rewards the good and punishes the bad. So I die in the bosom of the Roman Catholic Church. With Christ I forgive all that is to be forgiven. My heart no longer feels hatred towards anyone. How beautiful it is to forgive, especially at such a moment. I also ask my Father in heaven to forgive my enemies. I myself ask forgiveness from all those who have something to reproach me for. My heart has not felt lasting hatred during my short life.

I do not die stoically, but Christianly. I hug you, Papa; I hug you, Mama; and I hug Jean-Pierre, Hélène, Marie-Louise, Colette and Adrien; I hug my dear aunts and all the other relatives. I hug you tightly, very tightly, because it is the last time. My God! I cannot escape your arms, I want to cry, but I cannot. My heart will explode. But we will meet again because we have one soul. I will find a little angel again, my little sister Marie-Thérèse. Oh! Marie-Thérèse, come and lead me to the eternal dwellings. You see, I leave the living and join the dead. In the end, one must die. Everyone without exception must take this step. Lord, release your servant in peace, as you promised.

Now I will receive the last rites of the Church. The prison chaplain is with me. Adieu and a thousand holy kisses.

My father and mother, thank you for all you have done for me since my earliest childhood. Goodbye, in heaven!

I return my soul into the hands of God.

Your child, your brother.

The original letter was shown in the documentary film "It's Cold in Brandenburg".