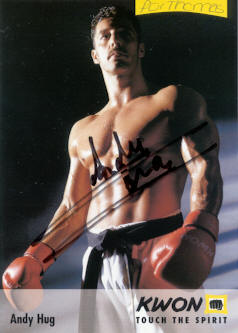 The death of a Swiss sportsman has rarely produced such a dismay as the one of Andy Hug. I too shuddered when I saw the TV report about the death of Andy Hug. Therefore it is an urge for me to write about this likeable sportsman and person.

Hug's story is the one of a rise from a poor family to an idol and folk hero in Japan. His father was foreign legionnaire and left the family very early. The upbringing was too much for his mother so that Andy and his siblings grew up by the grandmother. As a child he fought a lot but this changed when he tackled a karate training. Already at the age of 15 he became a member of the Swiss national team and at the age of 17 he owned a karate school.  Four years later he conquered the title of an European champion for amateurs for the first time.
When he became absolutely unexpected a Vice-World Champion at the age of 23 he was able to pay off his run ups and to continue successful this kind of sport.

After that he could make the decisive step to his incomparable career. At the age of 28 he took part at the karate world championship in Osaka and became at the first go the first non-Asian world champion. Because of his reserved personality and kindness he fit to the Japanese character in an ideal way and nothing stood in his way to become a myth.

Andy Hug returned to Switzerland with this success and launched the legendary K-1-Night of Zurich which he filled undefeated for the next six years. The virus also spread to the Swiss audience and Hug experienced an admiration what a Swiss athlete gets very rarely from the own Swiss audience.

One important reason that Andy Hug could attain a so high standing in Switzerland was, that he wasn't a prophet in his own country but a prophet in a exotic world. Who becomes one of the most popular personalities from nowhere cannot have no effect to his own nation.

His death came absolutely unexpected and in an incomprehensible speed. They diagnosed acute leukemia only on the 17th August. On the 23rd August he fell into a coma and the public heard about his terrible illness for the first time. But there was no time to digest this shock. Only 22 hours later the dreadful news circulated that Andy Hug died because of multiple organ failure and the following breath stoppage. He left behind his wife Ilona and his son Seya.

The death of Andy Hug was accommodated far more emotional in Japan. Sport moderators who have made their mark in life bursted into tears in front of running cameras. Andy Hug had chosen Japan as his new home and according to his wish there was performed a cremation.

His last project to tackle an actor career he wasn't able to realize any longer but his memory will live on forever in the heart of his fans.

When Andy Hug got to know of his serious illness he demonstrated his fighter heart a last time, and he wrote a letter to his fans:

I think you will be shocked when you hear in what kind of state of health I am. When the doctor explained the facts to me it was even for myself an enormous shock. But I will inform you about my state of health so that I can fight with you against this disease. This illness is the most difficult opponent of all my fights. But I will triumph. And in the same way as in the ring I will have new strength from your cheers and defeat this strong opponent. Unfortunately I am not able to take part in the tournament in October. I will fight against this illness in Japan and one day I will stay in front of you again. Let's hold out!