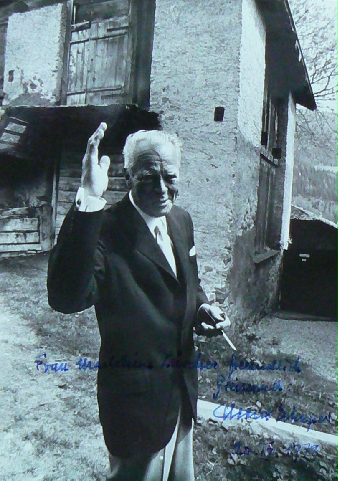 The writer Edzard Schaper got piano lessons at the Conservatory for Music and in 1925 he became a director assistant at the opera in Stuttgart.

But he soon moved to Denmark where he lived on the island Christianso till 1929. At that time he realised his first writing works, among others "Der letzte Gast" (27) and "Die Bekenntnisse des Försters Patrik Doyle" (28).

Afterwards Edzard Schaper carried different jobs like gardener subworker and as a sailor.

He went to Estonia in 1932 because he met his future wife Alice Pergelbaum in Berlin before who was living in Estonia. He domilicated there and worked as a freelancing journalist and writer for the American news agancy United Press.
In Estonia he wrote his first successful novel with "Die Insel Tütarsaar" (33), "Erde über dem Meer" (34), "Die sterbende Kirche" (35) and "Der Henker" (40).
His books were als published in Germany although he already was blackballed from the Reichsschrifttumskammer in 1936 and his books were forbidden in fact.

The political turbulences in Europe did not pass by him without impact. When the Sovjets occupied Estonia he had to flee to Finland in 1940 because of his employment by the United Press where he worked as a war correspondent and reported about the Sovjet invasion.

In Finland he was under supervision by the police, finally the political situation grew more acute and the German embassy revoked his passport and started a proceeding against him. The accusation: to abdicate from the responsibility for the military service and support of the enemy during a war.
Edzard Schaper was sentenced to death in absentia.

In September 1944 Edzard Schaper suceeded the escape to Sweden where he hide for the next three years and worked as a lumberjack and a helper for a hospital.

Only in 1947 his life came back to the normal and to safety when friends of him enabled the entry to Switzerland.
Now he was able to dedicate to his writing skills completely and he published numerous novel in the next years, at the same time he sticked up for the now occupied countries Estonia, Latvia and Lithuania with his essay "Auch wir sind Europa".

To Edzard Schaper's numerous awards belong the Fontane-Preis of Berlin, the Charles-Veillon price, the Gottfried-Keller price and the Gold Medal of the Humboldt assosciation plus the Konrad-Adenauer price for literature.