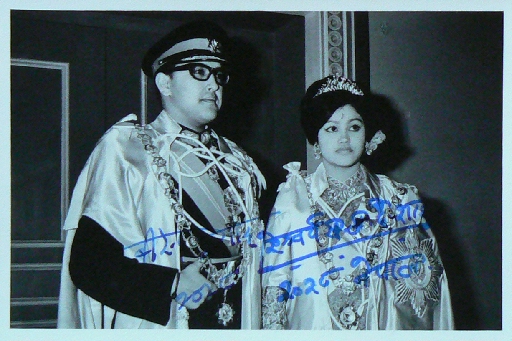 When the royal couple Birendra Bir and Aishwarya Rajyalaxmi was murdered in 2001, the head line went around the world and catapulted the otherwise scarcely noticed and the far away located kingdom Nepal into the spotlight of the interest.

Birendra Bir Bikrahm Shah acceded to the throne in 1972 as successor of his father King Mahendra and he ruled the kingdom Nepal for nearly 30 years.

As a child he got a modern education and he studied among others at the St. Joseph College in Darjeeling, India.

When his grandfather King Tribhuvan died in 1955 his father became the new king and Birendra became the crown prince of his country.

Birendra registered at the Eton College in Great Britain in 1959 where he studied till 1964 before he returned to Nepal where he perambulated his country incognito and visited isolated locations.

It followed a study in Tokyo and from 1967 to 1968 a study in politic at the Harvard University.

As a versatile interested man he travelled through many countries around the world, he learnt how to fly a helicopter and he was an art collector of Nepales artists.

He got married with Aishwarya Rajya Laxmi Devi Rana in 1970 and the celebration was hardly to outbid in the matter of pomposity. The marriage has to be costed nearly 10 million dollars.
They gave birth to three children who all were murdered as well at the massacre in 2001, forthermore seven other family members were killed as well.

Birendra ruled the country as an absolute monarch, political parties were not tolerated which led to conflicts time and again.
They launched a voting in 1979 if Nepal should be a multi-party system or an impartially country. The impartially option was voted by 55%.

But the displeasure among the population did not disrupt and ten years later there was a great many of strikes and the cry for democracy.
Finally Birendra gave in and declared his agreement for a representative monarchy. The new Constitution made Birendra to the head of state of the representative monarchy with a multiparty system. The new Constitution was published by Prime Minister K. P. Bhattarai in November 1990.

Arguments between the parties and social problems led to the Nepalese civil war between the Maoists and the government in 1996 which lasted till 2006. Birendra was pestered by his family to reintroduce again the absolute monarchy but he refused this request.

On the height of the conflict Birendra and his family were massacred on June 1, 2001. The circumstances of the assassination is still in the dark till today.
Birendra's oldest son Dipendra was pilloried as the initiant of the assassination. They said that Dipendra shot himself in order to avoid any suspicion. Accidentally he fatally injured himself and died several days later.

However in the general public they indicate the younger brother of Birendra, Gyanendra Shah, as the one who was the puppet master in the background.

Gyanendra became the new king of Nepal after Dipendra's death.


Birendra's wife, Queen Aishwarya Rajyalaxmi Devi Shah came from an aristocratic family which rules Nepal during 104 years till to the 50s of the 20th century. Her father was general Kendra Shumsher Jang Bahadur Rana.

Aishwarya was considered as an energetic and boisterous personality, which brought her many enemies, especially from the left-winger.
In 1998 she was pelted with stones by a crowd and they had to intensify the safety precautions intensively in order to ensure her future security.

She demonstrated her temperament during private as well as official affairs, among others she pulled down the stars from the uniform of a general when someone affirmed that the general had spoken disrespectful of her. Or she sent prince Dhirendra, the younger brother of Birendra, into exile after he had cheated her younger sister with whom he was married.

She was considered as the real power behind Birendra who influenced the fortunes of Nepal essentially.

At last the question who the assassin was can not be answered coherent. It remain two variants of which one may be the case:

On the one hand Gyanendra Shah who reacted with imcomprehension to the voluntary reduction of power by Birendra. During the family feast where the assassin happened he was absent. After the assassination only members of Birendra's family were killed, the family members of Gyanendra who were also present remained spared - also his son Paras people would expect to do such an act on behalf of his father.
The question who had profited from the assassin was clearly "Gyanendra Shah". In 2008 he had to retire from the throne because of the pressure of the general public and the monarchy was abolished completely.

On the other hand Dipendra who was enjoned from marrying his true love Devyani Rana by his family - especially by his mother. When he still wanted to marry her he would lose his position as a heir to the throne. In a squiffy mood he wanted to kill his father during the family feast (the only opportunity where all family members were without their usual bodyguards who normally were present around-the-clock) to become king himself. But during the assassination he lost the control and shot furiously and killed his family members. When he realised the consequences of his action he shot into his head himself.

But the whole issue also has a mystic aspect. Because after king Prithvi Narayan Shah ascended the throne of Nepal in 1768 and with it established the king dynasty of the Shah's he affronted an emeritus. This emerit put a jinx on the family which indicated that the king dynasty should only last for ten generations and afterwards disappear from Nepal for good.
King Birendra was the 10th king of Nepal.