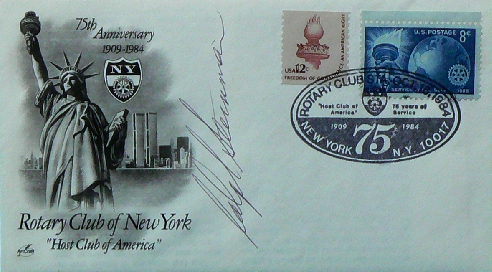 When the Nobel Foundation announced on October 3, 2011, that Ralph Steinman has been awarded half of the Nobel Prize for Medicine they didn't know that Ralph Steinman already died of pancreatic cancer three days ago. According to their constitution it is not allowed to grant this prize posthumously.

The foundation reached an agreement that the award occured in all conscience and because they were not aware of his death at that time they perpetuate the award as an exeption.
This decision was accepted unanimously by the general public and with it they created a happy end for the work of Ralph Steinman. At the same time is is a tragedy as well because Ralph Steinman could not experience the height of his career.

Ralph Steinman completed an education at the McGill University in Montreal and graduated 1968 in medicine at the Harvard University in Cambridge. Afterwards he worked as a doctor at the Massacusetts General Hospital in Boston before he went to the Rockefeller University in 1976. There he was busy as an immunologist and cell biologist and was able to bring forward his researches in a secured environment.

Later followed the professorship for cell physiology and immunology in 1998 and ten years later he took over the lead of the Christopher Browne Center for Immunology and Immune Diseases additionally.

He laid the foundation of his position in the science in 1973 when he developed the dendritic cells and their roles for the adaptive immunity.
But his development encountered great resistance, even animosity because many of his colleagues were not able to repeat his results due to lack of knowledge. At the end they impeached the credibility of his results.

But Ralph Steinman continued his work unperturbed and after hard convincing the professional world acclaimed his discovery - but it lasted more than 10 years.

Today his researches support the handling for transplantation and cander immun therapies and treatment of autoimmune diseases and infectous diseases like sepsis and AIDS.

Ralph Steinman was confronted with the shattering diagnosis cancer in 2007 and among others he medicated himself with an immunotherapy he developed himself then. This enhanced his expectation of life. From the primarly one year expection of life he survived four and a halfe year.

He did not reach his last goal indeed, however he was able to get and keep the Nobel Prize at the end.

It's only a question of time till Hollywood will picturize the live and death of Ralph Steinman because it offers the material the American cinema loves - scientist developes an important insight - struggles with antagonism - continues his work - comes down with cancer himself and uses he own development in a kind of self experiment. The tragic end with the conciliable "happy end" thank to the Nobel Prize completes the whole story.

For those collectors who have been specialised on autographs of Nobel Prize laureates, the original signature of Ralph Steinman will become a demanded and rare item.

The reproduced autograph was given by Ralph Steinman in 1984 when he was a presidental member of the Rotary Club of New York.