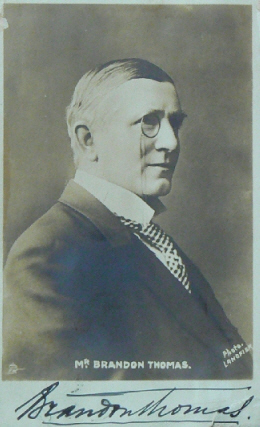 Because his family lived in poor circumstances he already had to work as a juvenile at a shipyard. In addition he also was busy a an occasional journalist. Till 1875 he worked as a clerk for a timber merchant.

But there was also the early wish to become an actor and he exerted himself in this direction - a wish his father did not appreciate.

He first appearance as an amateur actor came in 1870 into being.
From 1879 he got engagements at the Court theater in London, his first play was "The Queen's Shilling" and with it he started his professional acting career. He became a demanded character actor on stage and he soon wrote own plays and revues.
The first staged play written by Brandon Thomas was "Comrades" and premiered in 1882.

Together with Rosina Vokes' company he went on an American tour in 1885 and returned in the middle of 1886 to England again.
Afterwards he continued his stage career in England again, among others with "Sweet Lavender".

A first big success he experience in 1891 when invested money into three one-act plays in which he acted himself of which he wrote one. The performances were very successful and the income as a co-producer was not bad for Brandon Thomas.

Today the name Brandon Thomas is not well-known in public but his most famous play he ever wrote is till today very popular and noted.
We are talking of "Charleys Tante", of course, which he wrote in 1892.

The play became a success straightaway and joined great popularity. "Charley's Aunt" all records of other plays and made Brandon Thomas a wealthy and independent contemporary.

What started in London in 1892 was continued in the USA in 1893 and in Germany as well as in France in 1894. From there the play conquered the rest of the world. The story has been tranlated into 28 languages and has been performed in over 70 countries till today.

He continued his career as an actor and author till to his death, he often played in comedies and only sporadically in serious roles like plays of Shakespeare. To his successful appearacnes belong "Rosencrantz and Guildenstern" (1892), "The Rivals" (1895), "The Eternal City" (1902) and "Richard II" (1903).

Brandon Thomas died at the age of 64 in 1914. "Charley's Aunt" survived him till today and in the next decades there were numerous film and TV productions based on his play.