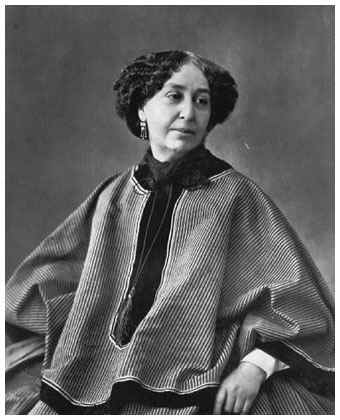 George Sand - behind this name hides one of the famoust authoress of the 19th century. She was born as Amantine Aurore Lucile Dupin in Paris on 1st July 1804.
On her father's side she had a titled family tree - her great-great-grandfather was August der Starke (1670-1730) - but George Sand pointed out with a kind of proud that she was attached to the people on her mother's side.

The family Dupin was stroken by two blows in 1808, first George Sand's younger brother Auguste died and only one week later her father fell from a horse and died because of the injuries. George lived with her mother in the house of her grandmother in Nohant in the period following but the two women had been so different that they couldn't make an agreement  and a living under the same roof was unthinkable. They reached an agreement about the upbringing of George which took on her grandmother.
Her mother moved to Paris with the promise that her daughter will follow later - a promise she never kept. This left behind a deep wound which only healed somewhat briefly before the death of her mother. 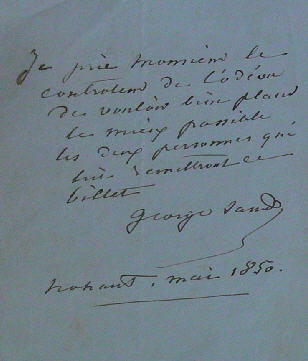 George Sand was sent to a nunnery by her grandmother for two years for the purpose of learning manners in keeping with her station. When her grandmother was dying in 1821 she addressed her last words to her granddaughter:

"You are loosing your best friend".


With the death of her grandmother George Sand was on her own. In 1822 she got married with the much older Casimir Dudevant, a marriage which didn't come into being but of the social pressure at that time to marry as soon as possible in order not to miss a good match. George Sand became later a strict opponent against the institution marriage because of these experience and proclaimed the free love.

Nine months after the marriage she gave birth to a son - Maurice.
In course of time the disadvantages of this marriage without love crystallized clearer and clearer. Her husband deceived her soon and later he handled her visibly more irreverent, even humiliating. This led to a final separation in 1836 although both went about their own life for several years.
Because of the early estrangement of both, George Sand didn't feel herself committed to her husband and had love affairs during the marriage. Her daughter Solange was born in 1828 and it is safe to assume that Casimir Dudevant wasn't the physical father.
Two years later she fell in love with the law student Jules Sandeau. She even took the plunge to let him climb in to a window in a night, when her children and servants were sleeping and her husband cured his drunkenness, in order to spend a night of fortune.

She went to Paris in 1831 and worked for the "Figaro"; it was her first literary activity, together with Jules Sandeau. Their first common works they published with the pen name J. Sand. Later when George Sand wrote her own articles, she agreed with the editor to call herself George Sand, because the name "Sand" became already well established by the "Figaro"-customers.
From now on she also adopted the habit to speak about herself in the masculine form. She became famous and notorious for wearing men clothing and heavy boots, for smoking cigars, for having numerous lovers and for keeping up a long-standing affair with actress Marie Dorval.

Only one year after entering her new job she published her first novel - "Indiana" - which had a great success. George Sand turned out to be an extreme hard-worker.
Only six months later sie brought out a draft for her second book - "Valentine".

"Lélia" - her third novel - produced a scandal which got her fame finally. She was catapulted into the circle of the great literary men and women of France. From now on she belonged to the best paid writers in her time und was mentioned in one breath with Balzac, Dumas père and Hugo. 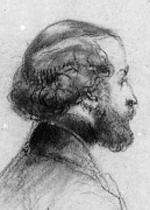 In 1833 she became acquainted with Alfred de Musset - a young writer whom was predicted a great future. In a letter he confessed her his love. The relationship lasted less than a year. When they went to Venice on 12th December 1833, George tried to keep upright a great deal of work during the stay. But Musset didn't have a great understanding for it and he enjoyed himself with prostitutes instead and indulged in alcohol. When Musset fall ill it happened that George Sand fall in love in the doctor Pietro Pagello, who took care of Musset. After Alfred's recovery Musset left Venice and returned to Paris.
When George Sand also returned to Paris together with Pagello in 1834 she became reconciled with Musset. It followed repeated separations and arguments till she decided to break off the relationship for good.
The relationship between Musset and Sand went down in history of literature as "Love Drama of Venice".

George Sand kept up a amicable relationship with composer Franz Liszt. Together with Liszt and his partner in life countess d'Agoult she made a journey in 1836 all over Switzerland. This was one of the rare exuberant moments she allowed herself or rather were granted to her.
George Sand's mother died in 1837, after that George wrote in a letter:

"...she sometimes hurt me and my greatest sorrows were caused by her. But she made everything good lately and I have realized with satisfaction that she finally understand my character and she did total justice to me".

In the mid-40's Sand produced her most extensive work with the title "Consuelo", which is judged as the best of her works.
During the revolution in 1848 she travelled to Paris right away where she teamed up with members of the provisional government. George Sand had supported the equalization of man and woman, of poor and rich, for years and now she supported the socialistic republicans. But the republicans, the plain people, were put down. The bloody armed conflicts between people and national Guards claimed 10'000 dead workmen, many were put in prison. George Sand supported revolutionaries who fled into exile or were sentenced.

After these serious political incidents and the changing interests of the readers George Sand had also to make concessions and adjust to the public taste by going easy on political and religious topics if she wanted to earn money with her books furthermore.

George Sand impressed personalities of her time all her life. So she made longstanding friends with writer Honoré de Balzac and composer Frédérich Chopin.
In her last years she kept up an extensive pen friendship with writer Gustave Flaubert, the author of "Madame Bovary", who also was a guest at George Sand occasionally. Inspired through this longlasting friendship, Flaubert wrote for her the master novella "Ein einfaches Herz" and sent it to her for reading. But she wasn't able to read the story. She died after a short, very painful illness on 8th June 1876.

Once George Sand wrote about the death:

"The death, this is ourselves, this is for certain. There is a mysterious link which results in , that our life nourishes from itself".

Because of her immense work she bequeathed about 180 volumesand countless newspaper articles to the posterity. Of 40'000 letter she wrote are 15'000 remained (one of these letters is shown above in this report). A number which verifies that she worked hard till old age and that she wrote nearly eight hours daily.

She looked for the great love during her whole life, someone who was able to love her the same way she was ready to love.
Everybody who knew George Sand was touched by her personality. Either she produced rousing, adoring and loving feelings or else despising even refusing feelings.

Nobody spoke up for in the same enthusiastic way in France for passionate love or preached the merger of all classes or condemned the restriction of the woman at that time and the institution marriage.