In February 1942, at the height of the carnival of Rio, Stefan Zweig and his wife Lotte had committed suicide with Vironal. The burial was like a state funeral.

Stefan Zweig was born as a son of well-to-do Jewish citizens in Vienna. Without great motivation he finished school and study. His real studies began not till his journeys through Europe and the inner breeding through friendships with important personalities of his generation. As a restless one he made journeys through whole Europe, but he continually returned to Austria, his original place.

During World War I he was allocated to the Viennesse war archives because he was unsuitable according to medical examination for military service. It was his job to write war stories à la minute, that is writing little war actions for the public, decorated like a novella.
Zweig didn't make out the madness of the war until a short stay at the front line and he designated it as the European suicide. 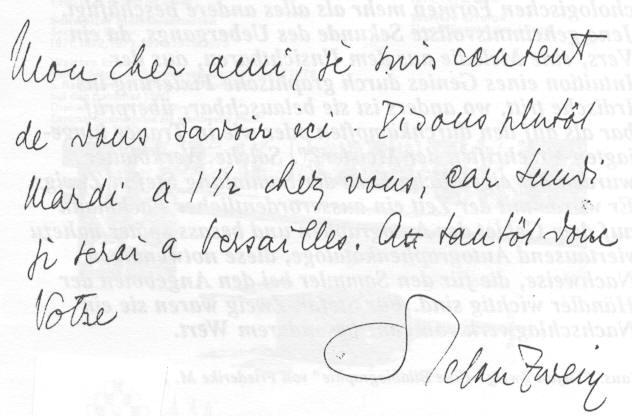 During his time in the war archive he wrote his first dramatic poetries, the "Jeremiahs". The play was shown in Zurich for the first time. There Zweig met the Red Cross employee Romain Roland, who influenced him decisive in line of pacifism.

After the destruction of the Austrian empire through the war it applied to Zweig to build himself a new world. High above Salzburg he bought himself a house. In 1920 he got married with his long-standing partner of life Friederike von Winternitz.

Stefan Zweig was an energetic advocate for a combined Europe. At the beginning of the 30's he was haunted by terrible forebodings, produced through the political trend. Brief after the assumption of power through the National Socialists Zweig wrote:

"Each kind in the direction of freedom in Germany is abolished and it will take only a short time and Austria will have the same destiny. All National anti-Semitic excesses are only there provisional in order to occupy the people and to inspire them with enthusiasm in a cheap way. But the government will need foreign success little by little, then I really foresee disastrous developments".

Stefan Zweig saw the danger of war clearly in mind. He went on making journeys through Europe but he couln't suspect at this time that this was a kind of farewell when he left his house. Stefan Zweig stood again at a turning point  of his life.

Like most Jewishs he also couldn't graps that he would be banned and followed because of his Jewish origin.
Zweig went into exile to England in 1936. Two years later got a divorce of his wife Friederike and got married to his secretary Lotte Altmann.

He left England in direction to New York in 1940. It is a say goodbye to Europe, for ever. Because the visa for the married couple Zweig was limited, they travelled to Brasil where they got a permanent residence permit. Hope of a new beginning?

But the loss of his home Austria and the intellectual home Europe caused depressions in Stefan Zweig. The man without home country, as he described himself, wanted to live no longer.

"It is finished, Europe sorted itself out, our world is destroyed and at the age of 60 you are undermined anyway and half finished, I want exist no longer, I don't have decades in front of me, I don't want them any more".

He and his wife emphasized these word a short time later with a double suicide.

50 years later Europe is on the way to unite. Even if Stefan Zweig was more thinking of a cultural uniting than a economic one, as it is emerging today, he has his position in the line of them who brought Europe on this way.

It is not so well-known that Stefan Zweig was a fervent autograph collector. The first pieces of his fame becoming collection he purchased as a student.
At the age of 15 he collected signatures first and with undisguised pride he showed that street corner where he requested a great personality for his signature for the first time - it was composer Johannes Brahms.
Not much later he had bought a little Hebbel manuscript with his savings. With it the step from a signature collector to an autograph collector was done, and each new sheet offered a look for this young man into the workshop of poets.

"What I was looking for were original texts or first drafts of poems or compositions, because I dealt with the problem about the creation of a work of art both in the biographical shape and psychological shape. That most mysterious second of the transition where a verse, a melodie enters the earth from the invisibility, from the intuition of a genius through graphic fixing. Where else is it possible to listen to the creation or to scrutinize to it than on the treated or like in trance dashed off original texts of the masters?".

Such work sheets were the real heart of Stefan Zweig's collection. In course of time he became a remarkable authority on autographs and later he possessed nearly fourthousand autograph catalogs; these necessary certificates which is important for the collector in order to check the offers of traders. For Stefan Zweig they were a reference book of special value.